The 25th annual Brainerd Jaycees Ice Fishing Extravaganza is this coming Saturday, January 24th, on "Hole in the Day Bay" on Gull Lake. Bill Rickmeyer, one of our real estate agents at RE/MAX Lakes Area Realty in Nisswa, was President of the Brainerd Jaycees in 1991 when members suggested the contest.

Bill writes, "It was to be a: ONE HUNDRED THOUSAND DOLLAR EXTRAVAGANZA! The big focus by the members, was on a One Hundred Thousand Dollar Contest! Personally, I thought they were crazy", Bill says, "because it seemed like a lot of money, and we didn't have much. Chris, one of the 'Idea Men' behind the contest, mortgaged his house to make the contest happen. There were many, many people who have contributed to the contest over the years, but if it were not for Chris it may have never happened."

Bill wraps up by saying, "I had the opportunity to Chair the Contest in 1995.  Planning for an event like this takes all year. My motto has always been, a body in motion tends to stay in motion! So far this event has been able to generate a lot of money for LOCAL CHARITIES."

For more information regarding this years contest, click HERE.


History of the Ice Fishing Extravaganza:

In the early 1990s the Brainerd Jaycees had a desire to develop a signature project—a project that would rally members, raise money for local charities, and provide avenues for individual growth, personal development, and leadership. With the first contest being held in January 1991, it is certain the founders never expected this event would become the world’s largest ice fishing contest and put Brainerd, MN, on the map with a winter event that generates over $1-million in revenue for area businesses and over $150,000 for area charities annually. 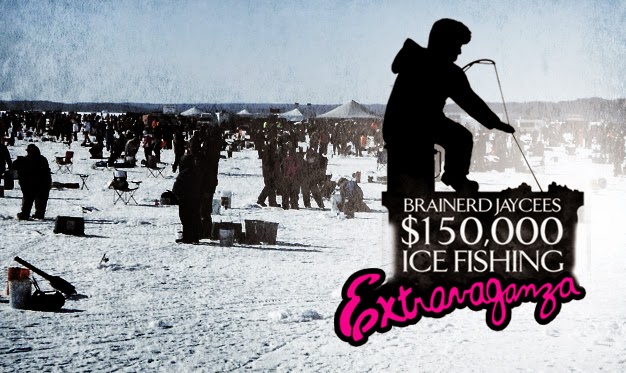 Contributed by Bill Rickmeyer a Real Estate professional at RE/MAX Lakes Area Realty in Nisswa, Minnesota. Call our office at 218-963-9554 and talk to Bill about your Real Estate needs. You may also visit Bill's website at www.billrickmeyer.com or email Bill at bill.rickmeyer@remax.net for more information.